Art for the Visually Impaired

Mr. Gulergun left Turkey over thirty years ago to study art at Oxford in England and professionally has done all of the above. Coming to America after completing his studies in 1980, he was an art director for fashion designer Oscar De La Renta, started a textile fashion design studio working with Italian, French and English suppliers, and later put his artistic talents to work for Ralph Lauren.

Mr. Lauren would go into the meetings and see most of the designs that were later replicated onto clothing, says Mr. Gulergun. But always producing and selling impressionist paintings, Mr. Gulergun’s clothing art eventually jumped out at him, causing his creativity to morph above a single dimension. “I started reinventing the canvas,” he says and single sided art gave way to pyramids, cubes and spheres.

Not really having shown it around much at this point, creating art in 3D is certainly more complicated. “It’s more challenging because of the perspective,” he says, but it returns a response to appreciative viewers that is raised by a power or two. “It creates an optical illusion,” says Mr. Gulergun, “and gives the impression of movement.”

Unfortunately, in a photo, 3D is lost a bit to the printed page but picture or in person, those who may have lost their sight are suddenly left out of what an artist like Mr. Gulergun has to offer – even if their passion has not left them. This was something that never occurred to him until close family friend Chuck Aranson went blind due to complications of diabetes.

At about this time, he was putting together a piece by squeezing tubes of acrylic paint to his canvas. Of course, raised off the page with more texture, Mr. Gulergun realized that Mr. Aranson would at least be able to interpret the work with his fingers.

With Mr. Aranson appreciative and receptive to the piece, Mr. Gulergun decided he wanted to continue producing similar pieces and likens what they may actually look like to abstract art. “Do you know what the artist is saying to you? No,” he says, and for someone who is blind, it’s a matter of interpretation through touch.

In a larger context, Mr. Gulergun also wants to advocate on behalf of art lovers who have gone blind. For instance, going to the museum serves almost no purpose to the visually impaired if their sense of touch is also restricted. Even in the case of sculptures, museums put limitations on the blind – especially when touch can really mean something in the absence of sight. “We can’t feel it through gloves,” says Mr. Aranson.

So along with producing works for the blind, Mr. Gulergun wants to raise awareness on behalf of those who cannot see and have museums set aside rooms specifically for touch appreciation. “I’d like to advocate this idea to museums around New York City and the country,” he says. As it is now, he’s trying to get a grant for The Blind Art Project, and strongly encourages other artists to join him. 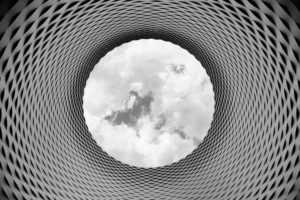